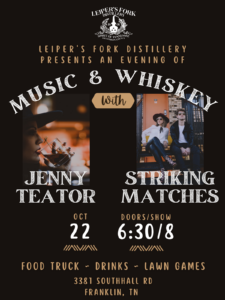 Come join us for a Stillhouse Sessions at Leiper’s Fork Distillery featuring Jenny Teator “Whiskey With Me” Kickoff Tour and duo Striking Matches.
“Rock and roll with a hint of soul.” That’s how Jenny Teator describes her music. A lifelong songwriter, Jenny’s music is defined by uniquely soulful vocal melodies, a clever combination of blues, rock and country guitar riffs, and beats that make anyone dance. Jenny Teator thrives off the grind and never stops pushing forward. A natural love for entertaining people epitomizes her passion and authenticity. When asked what impact she intends to have on the music industry, Jenny simply responded, “break the mold.” Her list of superlatives continues to grow, traveling the country with The Nashville Trio putting on acoustic house concerts, sharing the stage with acts like Cowboy Mouth and Candlebox with her full band, among many others along the way. Her song “Daughter of the Devil” was recently featured in HBO’s “The Hype” and she’s had other placements on CBS’s “The Young and the Restless.”
We are also pleased to annouce duo Striking Matches! Sarah Zimmermann and Justin Davis, two gifted singers, guitarists, and songwriters team up to create Striking Matches, a Nashville-based duo whose music is a fresh combination of country, blues, and rock, with an approach that respects roots music traditions while making room for new musical thinking. Exploding onto the scene after 9 original songs were featured on the popular television drama “Nashville,” the duo captured audiences with what Vince Gill dubbed their “high octane” showmanship.  In addition to “Nashville”, they have had songs in Grey’s Anatomy, American Idol, The Secret: Dare to Dream (starring Katie Holmes and Josh Lucas). Known for their prowess on their respective guitars, powerful individual lead vocals and captivating harmonies, this duo boasts a rabid international fanbase and also happily appears regularly in their own back yard of Nashville, TN at the historic Grand Ole Opry, and the Bluebird Cafe. Striking Matches will be releasing their highly anticipated new album in 2023.
Doors open at 6:30 pm and Show Starts at 8:00 pm. Some Picnic Tables will be available for open seating, but Bring Your Own Chair or blanket for a guaranteed seat. *Rain plan will be inside the Stillhouse and no outside chairs will be needed. There will be a Food Truck onsite and Leiper’s Fork Distillery’s bars will be available to purchase cocktails. VIP tickets offer meet and greet with Jenny and Striking Matches, preferred seating up front for concert, signed poster, and a private tasting of Leiper’s Fork Distillery’s spirits. General Admission tickets available as well at the door. Door Prize: Raffle tickets to win a custom engraved “Whiskey With Me” Leiper’s Fork Distillery Barrel Head. NO OUTSIDE COOLERS ALLOWED

You'll get to visit our Still house, learn how we make our traditional small-batch whiskey, taste our spirits in our 200-year-old tasting room and more!